• Wooden hand crafted box made in the USA (No two are alike!)
• Two DNA collection cards. (For you and your spouse.)
• Two multi-barrier pouches.
• Two desiccant packets.
• Read the directions first and follow them exactly.
** Extra DNA kits are available! ** 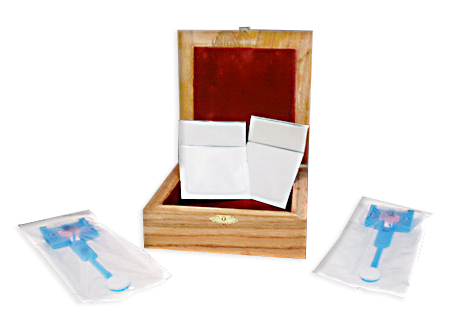 Wouldn’t it be neat to listen to and see a relative from the Civil War Era, or earlier? Now your family can hold your DNA and put a face and voice with it. What did your great grandmother and grandfather look and sound like? Create a photo album or scrapbook of yourself and family history. Order several DNA sample cards for your children, and place them in the G.I.F.T. Box with a DVD of yourself and your family. Remember, you are talking to a relative in the future, a product of your DNA!

Why do you want to preserve a DNA sample of yourself? There may be many possibilities due to the rapid advances of science and technology. Who knows what the value of your DNA may mean to your descendants! People freeze their bodies (cryogenics) in hope that they can be thawed out and brought back to life, (seem silly)?

On October 12, 2008, the Soyuz TMA-13 spacecraft carrying Richard Garriott and two crewmates – as well as the digitized DNA sequences of some of the world’s most famous minds – was launched into the sky from the Baikonur facility on the Kazakh steppe.

The Soyuz TMA-13 contains the digitized DNA sequences of some of the world’s greatest thinkers, musicians, athletes, video game players and others!

DNA sequences from famed physicist Stephen Hawking, to comedian Stephen Colbert, and Matt Morgan best known as the “Beast” from the television show “American Gladiators”, are part of the “immortality drive”. A time capsule with a list of personal messages and our greatest achievements from Earth. If one day the planet were to be one day wiped out, all of the DNA sequences from this program will be stored on the space station! Soyuz TMA-13 Source: From Associated Press, By PETER LEONARD (Associated Press Writer)